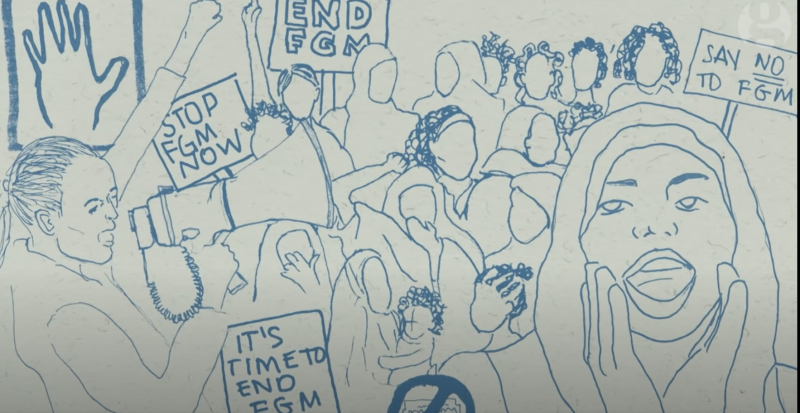 Screenshot from a Guardian YouTube video about female genital mutilation.

COVID-19 has deeply affected women’s rights in the Middle East and North Africa (MENA), from increased domestic violence to job loss. But there is also one less visible area where women are affected: female genital mutilation (FGM ), as its prevention is being disrupted because of the pandemic.

FGM is a global epidemic that also affects the Middle East

In April, the United Nations announced that “due to pandemic-related disruptions in prevention programs, two million FGM cases could occur over the next decade that would otherwise have been averted.”

Female genital mutilation includes “all procedures that involve partial or total removal of the external female genitalia, or other injury to the female genital organs for non-medical reasons,” according to the World Health Organization (WHO).

The practice, rooted in extensive traditions, cultural and religious beliefs throughout Africa, the Middle East and Asia, is typically performed by traditional midwives or healers using knives, razors or glass.

FGM, also known as genital cutting, is widely considered as “one of the most extreme manifestations of violence against girls and women.” It is estimated that it affects at least 200 million women worldwide.

The issue is explained in this UNICEF video:

In the MENA region, Female Genital Mutilation (FGM) is a problem that primarily concerns Egypt, Sudan, Yemen, Iraq and Djibouti.

Somalia has the highest prevalence of FGM with an estimated 98 percent of females between 15 and 49 years who experienced genital cutting. In Djibouti, an estimated 93 percent are affected, Egypt, 91 percent, Sudan, 88 percent, Mauritania, 69 percent, Yemen,19 percent and Iraq, 7 percent, according to the latest figures released in June by the United Nations Population Fund (UNFPA).

The practice varies according to social class, ethnicity and education in each country, with notable differences between urban and rural areas. FGM more often occurs among the poorest, least educated families in rural areas. In Yemen, FGM is concentrated in coastal regions but less common in the north. In Iraq, the practice is more prevalent in northern Kurdish provinces. In Egypt, it is markedly higher among girls living in upper Egypt.

The scale and scope of FGM may be underestimated because the “official global picture of FGM/C is incomplete,” according to a joint report from March, authored by Equality Now, End FGM European Network and the US End FGM/C Network. The report revealed “growing evidence that the ritual is also practiced in other regions including the Middle East and Asia,” and the “world woefully underestimates FGM.”

Small sample researches have recently shown that FGM is also practiced in Iran, along with Gulf states such as Kuwait, the UAE, Oman, and Saudi Arabia. Divya Srinivasan from Equality Now told Reuters that “she was particularly surprised at the results of small studies from places like Saudi Arabia and Oman, which are not normally countries that come to mind when you think of FGM.”

The report, published during the peak of the COVID-19 crisis in the Middle East, was not picked up by the Arabic speaking media or translated into Arabic, with little coverage of FGM in Arabic at all. This lack of public awareness may perpetuate the perception that FGM is not an issue of concern.

In Egypt, for example, Christians and Muslims both “believe that circumcision of girls prevents them from vice and makes them more attractive for future husbands; mothers fear that their daughters can’t get married if they have not been cut,” according to a report by Stop FGM Middle East, a campaign created in 2013 to raise awareness about FGM and whose aim is “to get the message out that FGM exists not only in Africa, but also in many countries in the Middle East and Asia”. The organization lobbies for more data on FGM and has created a survey toolkit to help individuals and groups create small-scale surveys on FGM.

Unless there is a critical incident that makes headlines, such as the recent FGM-related death of a 12-year-old girl in southern Egypt in February, people tend to avoid the topic.

As we don’t talk about it, it is as if the problem doesn’t exist. FGM is often practiced silently behind closed doors. It is happening far from the more educated urban centers of power where activists and politicians are seated. FGM is a controversial sensitive issue and unless there is international attention and funding, it is not seen locally as a priority by an overwhelming male political class.

Breaking the taboo and speaking out about FGM can expose human rights defenders and victims to hate speech and backlash.

In Oman, Women’s rights activist Habiba al Hinai, founder of the Omani Association for Human Rights (OAHR), conducted a survey in Oman in 2017 and found that 78 percent of women have been cut.

After publishing her findings online, Habiba received attacks and threats:

I posted my results online and the response was huge. I was attacked by religious conservatives who say female circumcision is a form of Islamic worship.

In Oman, where FGM is not officially recognized, there is no protection or support for victims. Habiba added in the report:

How can you ask a survivor to speak out against FGM and then face all the consequences —criticism and online defamation, her family and her tribe may disown her, maybe her husband will divorce her — without proper support. I don’t expect these women to speak out and face society.

FGM eradication: Too slow, too inadequate

In Yemen and the United Arab Emirates, FGM is only banned in medical facilities, but not in homes. In Mauritania, there are legal restrictions, but not an outright ban. In Iraq, FGM is outlawed in the Kurdish Autonomous Region but is still legal in central Iraq.

There have, however, been some major breakthroughs to eradicate FGM. Following years of advocacy from women’s rights organizations, Egypt banned the practice in 2008. Sudan, in a political transition after 30 years of dictatorship, is the latest to outlaw FGM in April.

But law enforcement remains a major challenge because FGM still has a high degree of acceptance and prevalence.

Although laws are an important deterrent, they are not enough. States need national, comprehensible strategies that include input from police, judiciary, clerics, health care providers and education to civil society.

A series of regional crises and authoritarian rule has delayed reforms, limiting campaigns and resources to tackle women’s rights violations.

Now, with the world’s attention shifted to COVID-19 and its economic impact, many programs that advocate for women’s rights and provide social services to vulnerable women are postponed or no longer a priority. With more families falling below the poverty line and girls taken out of school or forced into early marriage, FGM is also likely to continue to take place without notice in the region.