In Assad-controlled Syria, the official narrative is ‘no COVID-19 cases’ · Global Voices 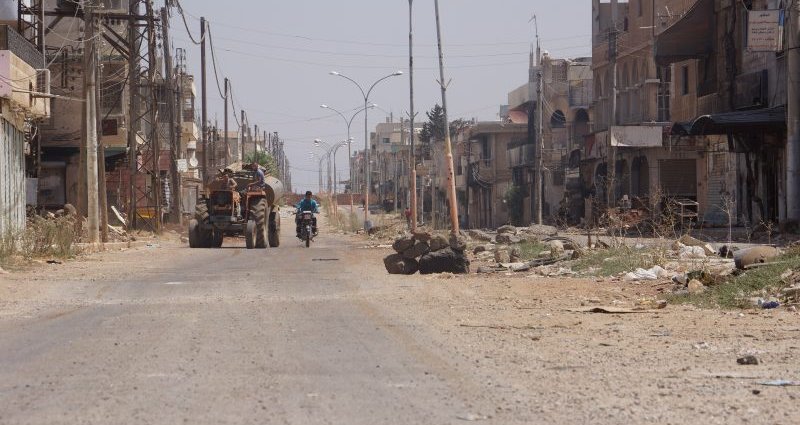 The pandemic has pushed Syria toward uncharted, catastrophic territory

After nine years of a deadly civil war, the health system in Syria is barely functional. In territories controlled by President Bashar al-Assad, authorities deny the presence of COVID-19.

According to Johns Hopkins University, the country has confirmed 439 cases and 21 deaths as of July 15. But narratives on the ground reveal the ways in which the state has denied and repressed the realities of COVID-19.

Walid Abdullah, 23, says the state has even gone so far as to suggest terminating the lives of suspected COVID-19 patients. Global Voices is using a pseudonym upon request to protect his identity. Speaking to Global Voices by phone, Abdullah explained that on May 13, he called Daraa National Hospital, in southern Syria, to inform them about a suspected case of coronavirus. When he asked what steps should be taken, the government hospital employee who answered the phone said: “Shoot him — we have no cure for him,” according to Abdullah.

He quickly ended the call. Obviously, the idea of shooting a suspected COVID-19 patient was out of the question. “Death by COVID-19 is more honorable than to set foot in any public hospital,” Abdullah told Global Voices.

This harrowing testimony is corroborated by other sources. In a March 10 report published in The Voice of the Capital, an independent Syrian newspaper, medical personnel from the Syrian Ministry of Health claimed that “deliberate termination operations are taking place at the al-Mujtahid government hospital in the capital, Damascus, for those who are believed to be carrying the virus, through giving them additional doses of the drug [anesthetic].”

Information that in Syria, coronavirus patients are terminated at al-Mujtahid hospital hours after the disease was diagnosed …

Another person from al-Mouwasat Hospital in Damascus was also quoted in the same article confirming this claim: “These terminations are conducted in complete secrecy and are carried out by doctors dedicated to following up on cases of suspected virus infection.” 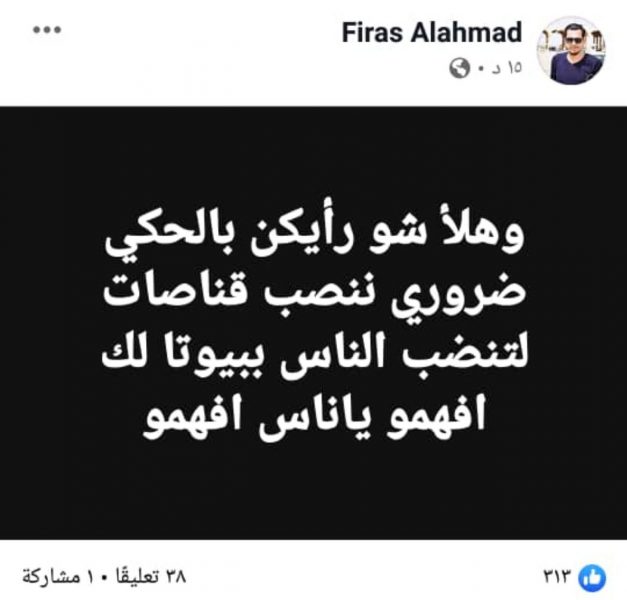 A now-deleted Facebook post by Firas al-Ahmad reads: “Now what do you think [of this idea]? Do we need to post snipers to force people to stay in their homes? Understand people, understand!”

Pro-Assad media institutions reflected the same mentality in their coronavirus coverage. At the onset of the outbreak, Firas al-Ahmad, a reporter at the state-run TV station, Syrian News channel (al-Ikhbariyah Syria) published a threatening post on his personal Facebook page to target those who defy the quarantine:

“Now what do you think [of this idea]? Do we need to post snipers to force people to stay in their homes? Understand people, understand!”

The post was later deleted, but a screenshot remained as evidence.

The Assad regime owes its survival to its key allies, including Iran. With few allies in the region, Iran has leaned on Syria as well.

In February, Iran became one of the world’s most COVID-19 affected countries and is a likely source of infection in Lebanon, Iraq and Syria, where Iranian troops have had physical contact through military cooperation. Additionally, Iranian pilgrims and religious tourists, continued to visit Damascus-based shrines up until the first week of March, as reported by Zaki Mehchy, co-author of a March study published by the London School of Economics and Political Science (LSE).

However, the Assad regime has pursued a policy of misinformation, prevarication and denial in terms of the number of COVID-19 casualties.

In a March 13 interview with the official Syrian News Channel, Minister of Health Nizar Al-Yaziji insisted on denying the existence of any COVID-19 cases in Syria, saying: “Thank God that the Syrian Arab Army has cleansed the Syrian soil from many germs:”

The Syrian Ministry of Health did not announce its first case of COVID-19 until March 22, causing resentment and anger among Syrians who noted that the Assad regime lied and pursued a policy of denial. In an article published on an independent  Syria 24 news site in response to Yaziji’s claims, one citizen poignantly asked, “didn’t you say in your statement that all germs have been eliminated?”

However, the regime has continued to report implausibly low numbers.

In a statement dated April 1, the Coalition for Syrian Revolutionary and Opposition Forces called on the international community to put pressure on the regime to disclose verified data regarding COVID-19 cases.

Stressing the assumed existence of a large number of casualties, the coalition wrote:

Information from the field confirms that the virus is spreading in huge numbers, making it difficult to control the epidemic.

Recognizing the pandemic is embarrassing for the Assad regime because it forces authorities to admit that the health system is non-existent.

According to the LSE study, the maximum number of COVID-19 infections that can be treated in the Syrian health sector is estimated to be only 6,500 in a nation of 17.5 million inhabitants. If casualties exceed this capacity, the health system, already worn out by the war, is likely to collapse.

Throughout the war, military attacks have caused widespread damage to the health sector. Data from the World Health Organization and the Syrian Ministry of Health show that only 58 hospitals are fully operational among the country’s 111 public hospitals.

The data also noted that up to 70 percent of health workers have left the country as migrants or refugees, while the rest are often subjected to restrictions, including military and political interference.

Human rights report: Assad regime killed 669 medical personnel, including 83 who died as a result of torture.

Perhaps the biggest challenge many Syrians face is the accumulation of disasters: war, a pandemic, and famine. The United Nations warned on June 26 that Syria is now facing an “unprecedented” hunger crisis, with urgent action still needed to prevent the spread of COVID-19.

According to the World Food Program, food prices rose by 11 percent in May compared to April, and 133 percent when compared to the same period in 2019. The United Nations Office for the Coordination of Humanitarian Affairs (OCHA) confirmed this situation in a June 12 report:

Lack of personal protective equipment. An unprecedented hunger crisis. A new generation knows nothing but destruction and deprivation. Significant lack of funding. Read what UN agencies have said about the humanitarian situation in Syria

As the economic situation deteriorates, 28-year-old Ali al-Ahmed (also a pseudonym upon request to protect his identity) from Daraa city told Global Voices in a phone interview that “the situation is bad, regardless of how much you work, even if you make 10,000 SYP a day [between $1 and $5 USD] it will not be enough.” Ahmed said most people have been forced to forgo many basic goods due to exorbitant costs.

Between a health care system shattered by years of war and an economic situation that has left many Syrians impoverished, the ongoing pandemic has pushed the country toward uncharted, catastrophic territory.

2020-07-18
Previous Post: ‘Where is my family?’: A question left unanswered for too many Uyghurs living abroad · Global Voices
Next Post: Could reform be on the cards for Jamaica’s prison system? · Global Voices