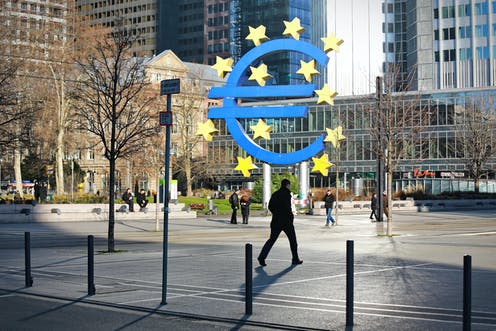 As governments around the world grapple with the public health and economic effects of the COVID-19 pandemic, there are striking similarities with the eurozone crisis that followed the 2008 financial crisis. Having researched this crisis, it is clear to us that there are some important lessons to apply to today’s recovery. The early signs indicate that the EU is responding much more effectively to this crisis than it did in 2008.

Many European governments are increasing their spending to compensate for the economic losses of lockdowns, as they initially did in the wake of the 2008 financial crisis. This is necessary when an economy contracts but relies on a rise in public debt – and the figures are much higher this time around. According to IMF forecasts, by the end of the year public debt will reach almost 100% of GDP in the eurozone on average. Italy, Greece, France, Spain and Portugal will exceed this.

We know from 2008 that a problem associated with rising debt is that investors can sell the bonds of a given country to buy those of a more credible country denominated in the same currency. Prolonged uncertainty over whether or not the European Central Bank would bail out struggling members (Greece, Ireland) led to the skyrocketing of borrowing costs in these member states and their rapid decline in others (Germany, France). This resulted in a liquidity crisis in the EU’s peripheral states. It wasn’t until the ECB president, Mario Draghi, made it clear in 2012 that the bank would do whatever it took to preserve the euro that crisis was averted.

This time round the European Central Bank has acted a lot more quickly, which has kept borrowing costs low for all eurozone countries. In March, the ECB created a Pandemic Emergency Purchase Programme, a temporary €750 billion scheme (£670 billion) involving both government and private debt. And another €750 billion fund has been proposed to bankroll recovery efforts going forward.

The big difference this time compared to 2008 is that the Franco-German engine of the EU has led calls for financial assistance. But there remain the “frugal four” (Austria, Denmark, the Netherlands and Sweden) that oppose the idea of transfers and prefer an emergency fund financed mainly by loans. A decision will be attempted at the upcoming EU summit on July 17-18.

One of the thorny issues, as with a decade ago, will be the conditions attached to EU support. The eurozone crisis was portrayed as a morality tale that pitted supposedly northern European values of hard work, prudent savings, moderate consumption and fiscal stability against perceived southern vices of low competitiveness, undeserved spending, inflated wages and profligacy. Financial support came with strict conditions, which took the form of austerity policies. This meant a reduction in public spending, wage cuts for government workers and tax rises.

Today this narrative has lost some of its strength. The north-south divide observed in 2009 is less clear since Germany seems to have changed camps. The last crisis also showed that austerity was not helpful in stopping the increase in public debt. GDP growth stalled and unemployment ballooned.

Above all, it is much harder (and obviously even more unfair) to blame individual countries for a pandemic. Although the crisis will be felt worse in the weakest countries that are still recovering from the previous crisis, the cause of coronavirus is the same for all member states.

Nonetheless, the details of how the EU’s recovery fund will be given to member states is up for debate. This includes whether or not the money will be given as loans or grants, what the terms of repayment will be and how it should be spent.

The new funds may not be enough to meet member state needs – and for governments to borrow extra it will be crucial to reassure investors that they will be reimbursed. Interest rates are still low, but – if investors panic or if the ECB cannot prevent this panic – then things could change. Then governments may be obliged to accept certain conditions, austerity for example, to remain credible in international markets.

But there is room for manoeuvre. In our forthcoming book we show that, when there was trust between the lenders and the bailed-out governments, conditions were not dictated. The EU and IMF lenders, collectively known as the troika, were open to solutions proposed by member states, as long as they reached certain objectives.

Thus, when for example, Portugal negotiated its bailout, it could insert specific policies or revisions and fought for others to be dropped. After the bailout negotiations, some governments such as Greece, Ireland and Cyprus successfully resisted the implementation of some policies they disliked; and lenders were sometimes willing to turn a blind eye and let this go unsanctioned.

So an important lesson for today is that conditions of lending will only be met if both sides agree to them. The preferences of different member states must also be taken into account.

Ultimately, the eurozone crisis showed that it was delayed collective action by the EU that empowered financial markets to exploit differences between the bond prices in different member states. The response to coronavirus so far suggests that the EU’s decision makers are aware of this. But the challenge for the 27-member bloc remains to act collectively, in agreement and for the good of all states.

Stella Ladi received funding from the Portuguese Foundation for Science and Technology. She is affiliated with Panteion University, Athens.

Angie Gago received funding from the Grant “Democracy in times of crisis: Power and Discourse in a three-level game”, funded by the Portuguese Foundation for Science and Technology, FCT, (Grant nr PTDC/IVC-CPO/2247/2014).

Catherine Moury received funding from the Grant “Democracy in times of crisis: Power and Discourse in a three-level game”, funded by the Portuguese Foundation for Science and Technology, FCT, (Grant nr PTDC/IVC-CPO/2247/2014).

Daniel Cardoso received funding from the Grant “Democracy in times of crisis: Power and Discourse in a three-level game”, funded by the Portuguese Foundation for Science and Technology, FCT, (Grant nr PTDC/IVC-CPO/2247/2014).

2020-07-09
Previous Post: Is stop and search contributing to the spread of COVID-19 in the UK?
Next Post: Can big countries realistically eliminate COVID-19 without a vaccine? Four experts discuss