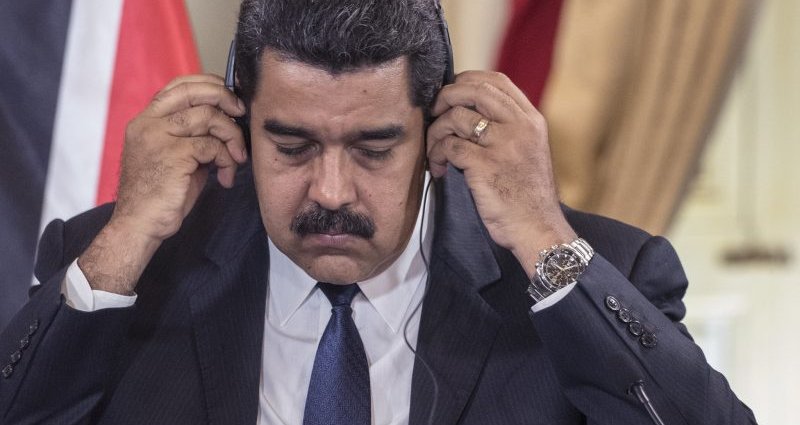 Statements about foreign meddling during civil uprisings are not new.

This story is part of our special coverage on Black Lives Matter and anti-black racism.

During the first half of June, as thousands marched to support the Black Lives Matter movement in major US cities, people started sharing photos and videos of demonstrators waving socialist slogans or Venezuelan flags in the United States.

Some demonstrators wore hats with the colors of the Venezuelan flag, others had bags and t-shirts portraying late Venezuelan president Hugo Chávez or Che Guevara, leading to rumors — going all the way up to the Trump Administration — that Venezuelan President Nicolás Maduro was connected to the protests.

Demonstrations began after the May 25 police killing of George Floyd in Minneapolis, Minnesota, and quickly spread across all 50 states. Anti-racist protests have slowly diminished in size but continue to spread around the world, leading to calls to defund police departments and to take down historical statues connected with slavery or colonialism.

We are aware of efforts by individuals linked to America’s adversaries, including the illegitimate regime of Venezuela’s Nicolas Maduro, to instigate conflict, help incite violence, and divide Americans by exploiting peaceful protests.

US Republican Senator Rick Scott also highlighted similar theories and stated that the US government would investigate any operatives tied to Latin American dictators who instigate conflict in Miami as part of the protests.

Reports that the Maduro regime and other LatAm dictators are supporting violent instigators at protests in the Miami area.

We will NOT allow it. Anyone with ties to these regimes that incites violence will suffer the legal consequences of their actions! https://t.co/xY6PHVOJ1x

Scott did not offer evidence for the allegations about Latin American socialist leaders’ role in the violence, lootings, and acts of vandalism during the US protests. During a press conference, he quoted a right-wing Diario Las Américas news report. The White House, for its part, declined to discuss “non-open source information” that had led to this assessment.

Meanwhile, Julio Borges, a leader of Venezuela’s parallel government who took on the role of Presidential Commissioner for Foreign Relations of Venezuela, also tweeted a similar statement.

“Again the regime appears to be a promoter of destabilization, now in the United States. The dictatorship uses the media and vandalism groups to promote violence. Maduro is a threat to democracy on the continent, so we must focus on removing him from power.”

The tweet came after well-known Grayzone journalist Max Blumenthal, often seen as a propagandist for chavismo — Hugo Chávez’s brand of socialism — was photographed wearing a Chávez t-shirt at the protests in Washington DC.

I’ve seen a lot of people talking about this photo of someone wearing a Chavez T-Shirt at the protests in Washington DC last nigh.
It’s Max Blumenthal from Greyzone wearing the shirt while he was recording the protests.#Venezuela pic.twitter.com/bTkwf863MD

IT WAS PLANNED! Is the Sao Paulo Forum behind the disturbances in Washington D.C.?

Foro de São Paulo, or the São Paulo Forum in English, is a conference of socialist political parties and other organizations from Latin America and the Caribbean. It was created in 1990 with the goal of becoming a counterweight to neoliberal policies.

The Venezuelan opposition is also criticized

Blaming foreign socialist governments for protests has further polarized politics in Venezuela. The editor-in-chief of right-leaning media Panam Post, Orlando Avendaño, criticized Juan Guaidó, whose claim to the Venezuelan presidency is recognized by the US and other countries, for not openly showing support for the US government during the Black Lives Matter protests. In 2019, Guaidó made a claim to the presidency which is widely recognized internationally.

Panam Post opposes Maduro, but also criticizes Venezuela’s largest opposition bloc led by Guaidó, as it would not vocalize enough support for the United States.

“The existence of the interim opposition government is conditioned by Trump’s stay in the White House. The United States is, without a doubt, our greatest ally. Trump has been with the country bursting with protests for the last two weeks, with protesters trying to topple him, and Guaidó has not given the first gesture of support. Unacceptable”.

However, statements about foreign meddling during civil uprisings are nothing new. When protests were sparked in Chile after the rise of public transport prices in the capital Santiago de Chile, President Sebastian Piñera and the local media reported a high presence of Venezuelan protestors. Yet, this would not be atypical as there are now about 500,000 Venezuelan migrants in Chile. Journalist John Bartlett compares both historic movements’ coverage in the press:

Correction: The sentences regarding Juan Guaidó have been corrected on July 2 to more accurately reflect his claim to the Venezuelan presidency and international recognition.

2020-07-04
Previous Post: Russia scales up electronic voting for key referendum, but misses security issues · Global Voices
Next Post: Swimming makes you hungrier and likely to eat more at the next meal – new research