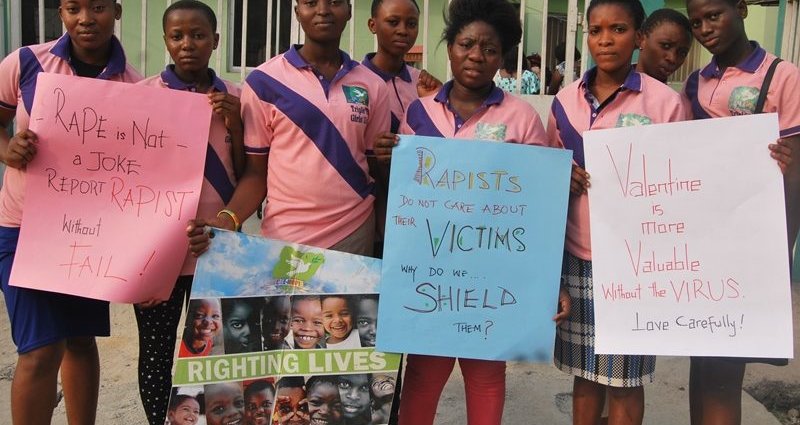 Triple G: Girls Go for Greatness members from Lagos and Ogun state at the “Guard Against Rape” seminar in Lagos, February 13, 2016, via CEE Hope on Flickr CC BY 4.0.

In June, Nigeria declared a state of emergency on rape and sexual violence in all 36 Nigerian states.

Earlier that month, activists from women-led groups marched and sent a memo to Nigeria’s House of Representatives, demanding Nigeria to adopt and properly implement the 2015 Violence Against Prohibition Person’s Act (VAPP).

This was triggered by brutal rape cases reported in May and June: Barakat Bello was raped and killed in her home; Vera Uwa Omozuwa was killed in her church in Benin City, southern Nigeria; and a 12-year-old girl was raped by 11 men in Jigawa, northern Nigeria.

Despite this new state of emergency, a culture of rape and impunity persists, making it difficult for victims to hold their abusers accountable. One in four girls and women will experience rape and/or sexual assault before the age of 18, according to the United Nations. However, there are less than 80 total recorded rape convictions in Nigeria.

VAPP ensures that victims of rape and sexual assault have the right to physical and psychological examinations; Perpetrators found guilty of a sexually motivated crime could face between 14 years and life imprisonment.

So far, only 17 of Nigeria’s 36 states have adopted VAPP into state laws.

Gender based violence, rape and sexual assault have no place in our society. It is unacceptable behaviour and a blemish on our collective humanity and dignity as a people and as a nation.

The most recent high-profile rape case involving popular Nigerian musician D’banj, is a chilling reminder that despite the state of emergency, a culture of rape persists.

On June 3, a woman named Seyitan Babatayo alleged in a since-deleted Twitter thread that artist Oladapo Daniel Oyebanjo, known as D’Banj, entered her hotel room and raped her.

Seyitan says she decided to go public with her story because she wanted to call out D’banj out on his hypocrisy after he declared solidarity with the #NoMeansNo campaign.

D’banj denies these allegations and tweeted:

#SAY NO TO RAPE AND HUMAN RIGHTS VIOLATION https://t.co/YSI8Zb3Mg5

On June 23, Seyitan released an official statement through legal representation with Stand To End Rape (STER), detailing the horrific ordeal that followed after she went public:

PRESS STATEMENT: Ms Seyitan Babatayo on her criminal complaint of rape against Mr Oladapo Daniel Oyebanji and the timeline of events since she shared her experience. pic.twitter.com/NB9qqUhdKP

According to the statement, Seyitan reported her case to the police on June 6, but officers did not pursue the case. On June 16, however, Seyitan said she was arrested from her apartment without a warrant, by four plainclothed police officers, from her apartment in Lagos. She was detained for 48 hours.

Around this time, Seyitan's Twitter account was compromised. Her accusatory tweets were deleted and replaced with two new tweets: one withdrawing her claims and the other promoting D’banj’s new music. It is unclear at this time who gained access to her account.

After she released her statement, netizens and lawyers expressed disappointment in the police force. Soon after, the Nigerian Police Force officially subpoenaed D’Banj and opened the case for investigation.

This is crazy. The Nigerian police must also prosecute @iamdbanj for kidnapping/deprivation of liberty (s269/270), perversion of justice (s97), and bringing false accusation (s93) under Lagos criminal law.

A state of emergency implies that police are obligated to take rape cases and reports seriously, but women have recounted incidents where the police — both male and female officers — often dismiss these cases, blame the victims or assault their legal representation.

Speaking out leads to silencing — or arrest

In Nigeria, women are increasingly turning to protests and social media callouts to hold perpetrators accountable. But these actions can sometimes increase the threat of harm to activists who dare to speak out.

In 2019, Fakhrriyyah Hashim coined the hashtag #ArewaMeToo, to highlight the gravity of domestic and gender-based violence in northern Nigeria. Arewa is the Hausa word for “north.” While women face a range of dangers throughout patriarchal Nigeria, the dangers of being a woman are magnified in the north, where religion and collectivism are often used as tools for oppression.

In her tweets, Hashim proclaimed that Abubakar Sadiq Aruwa, the then-special adviser to the governor of Kaduna State, had raped or sexually violated multiple girls and women. Amid the flood of tweets and posts under #ArewaMeToo, Aruwa was one of the highest-profile men named in the northern region:

For years, @MusadiqZ ventured to find vulnerable girls and ‘ allegedly ‘ abuse them because he knew age being a factor, he could scare them into doing anything he wants, while also harbouring items as his tools for blackmail.

Maryam Awaisu, a friend of Hashim, also got involved in the movement, sharing alleged stories of girls and women getting sexually harassed and abused in northern Nigeria, many of whom are minors in secondary school.

We will come for you creeps and all you value. Your nonexistent reputations. Your jobs. Your unabashed ways. Satans in human form, put on your running shoes. Cause the #ArewaMeToo tornado is JUST beginning.

Note : All these came from first-hand testimonies by his victims, who are mostly underage girls. They were compiled painstakingly over months.

Surrounding circumstances have left us with no option but to conceal the identities of these victims. #ArewaMeToo

In response, Aruwa released a statement through his attorneys claiming that these accusations are “defamatory commentary” on his person and “spurious and unsubstantiated allegations of rape,” from a list of seven Twitter handles mentioned in the letter.

On February 19, 2019, Awaisu was arrested by the Abuja unit of the Nigerian Special Anti-robbery Squad for her direct involvement in the #ArewaMeToo movement. She was reportedly arrested in direct response to Aruwa's statement.

Amnesty International released a statement in Awaisu’s defence, affirming that officers attempted to violate her privacy:

While arresting Maryam, the police attempted to gain access to her laptop and mobile phone by force; this is clearly an effort to access the sensitive evidence she and other human rights defenders have been gathering to seek justice for victims of sexual violence.

Awaisu was released the next day after a torrent of tweets and statements from advocacy groups demanding her release.

Awaisu’s arrest demonstrates a trend in Nigeria of the police favouring people with financial power and social status at the expense of female victims.

Awaisu said that police reform is critical in a conversation with Global Voices on June 16:

We’d have to educate the designated law enforcement on what works and what doesn’t since it’s their duty to escalate these issues. There are only so many people activists can reach, so the police need to be taught and they need to be trained.

Organizations like the Mayafi Initiative now provides legal and social service support in nearly every northern state, making it easier for girls and women to seek help. But law enforcement must take further steps to hold abusers accountable.

2020-07-04
Previous Post: How COVID-19 affects education for people with disabilities in Ghana · Global Voices
Next Post: Justice, inclusion and an economy for all: Australian activists mobilise at Virtual Progress 2020 · Global Voices