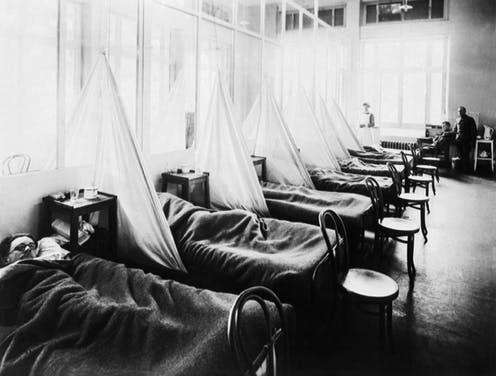 In this third episode of Recovery, a series from The Anthill Podcast exploring key moments in history when the world recovered from a major crisis or shock, we’re looking at what happened after the combined shocks of the Spanish flu and world war one.

It was called the Spanish flu because the first reports of the virus were in Spanish newspapers, due to wartime censorship restrictions elsewhere. The 1918-19 flu was the worst pandemic in human history. More than half the world’s population was infected. Estimates for the number of people who died range from between 20 and 50 million. And this off the back of a devastating world war in which 9.7 million military personnel and another 10 million civilians died.

To find out about the recovery after these combined shocks of war and pandemic, we hear from three experts in this episode who study the period.

Caitjan Gainty, lecturer in the history of science, technology and medicine at King’s College London, explains what measures were put in place to recover from the Spanish flu and how the pandemic led to a rethink in the way cities and buildings were designed, and a focus on fresh air.

Tim Hatton, professor of economics at the University of Essex, outlines how an economic boom followed the end of the war due to pent-up demand, but it was followed by a severe economic slump and high unemployment. He explains what policies were introduced to help the recovery and why that recovery was patchy in the UK.

And Chris Colvin, senior lecturer in economics at Queen’s University Belfast, tells us why it’s so hard to unpick the economic impact and recovery from the Spanish flu from the recovery from the first world war. And he explains why in their desire to return to what they thought of as “normal”, some politicians decided to reintroduce the gold standard in the early 1920s, with mixed consequences.

You can read more about the Spanish flu on The Conversation here as well as other articles in our Recovery series to accompany this podcast.

This episode was produced by Gemma Ware and Annabel Bligh, with sound design by Eloise Stevens.

2020-07-03
Previous Post: Coronavirus: Beijing outbreak shows China’s plan for preventing a second wave
Next Post: Running: ibuprofen use is common – but many athletes are unaware of the risks