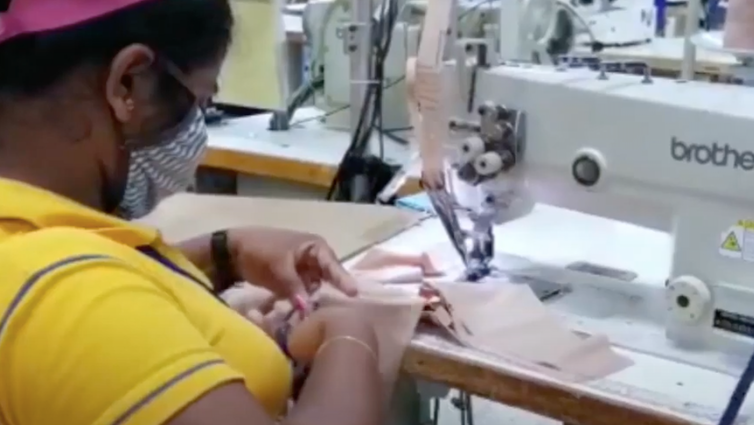 Personal protective equipment (PPE) has arguably become the most sought-after commodity in the world. The COVID-19 pandemic has led to a global shortage of this equipment. This has created an opportunity for garment factories across Asia, which have lots of spare capacity because their clothing is in much less demand than usual.

High street chains in the UK and elsewhere could have immediately paid their garment suppliers to make PPE rather than clothes, but did not. Many simply cancelled millions of orders, which ended up putting thousands of Asian workers out on the streets. Many garment workers didn’t even receive monthly wages due to them. This was despite global campaigning by trade unions, such as those in Bangladesh.

Only a few western brands such as Barbour eventually started converting their supply chains to make PPE. In most cases, Asian manufacturers just took their own initiative.

China was already the largest PPE exporter before the pandemic, providing almost half of the world supply of face masks, protective gowns, gloves and goggles in 2018. In the first two months of 2020, China’s PPE exports dipped by about 15% as its own demand for these products rose sharply, with the government preventing some consignments from leaving the country.

However, from March, Chinese PPE exports rebounded as the virus spread west. China was able to meet these orders with help from many garment manufacturers, in a bid to answer mounting calls from other countries for tighter quality control of PPE.

Elsewhere, Sri Lanka has secured a significant niche in the PPE supply chain, having won at least US$500 million (£402 million) in orders during the crisis. Notably, lingerie manufacturer MAS Holdings advertised a move into PPE production using its trademark slogan, “Change is Courage”.

Malaysia has enjoyed a massive rise in rubber gloves exports. With as much as 65% of all medical gloves made in the country, the US embassy tweeted in March that “the world relies on Malaysia”. The country has also seen numerous garment businesses moving into PPE.

Meanwhile, India is now the second largest PPE producer after China, having only started making this equipment earlier in the year. India was manufacturing 450,000 PPE suits a day in May, and aiming to hit 2 million by the end of June. While Indian production has so far only targeted the domestic market, the government has just announced it will soon allow the export of 5 million PPE suits a month.

Bangalore is producing 50% of India’s PPE kits, thanks to a garment centre dominated by the Gokaldas empire, which employs thousands of women. Production has also risen massively in Tiruppur in Tamil Nadu state, normally a T-shirt centre. Over 600 Indian companies are now lab-certified for PPE, including top garment and textile exporters Alok Industries, JCT Phagwara, Gokaldas Exports and Aditya Birla.

With a population of well over a billion, and around 37,000 public health facilities, India needs a staggering quantity of PPE as the pandemic worsens. As it emerges from a tough lockdown that still threatens an economic crisis, the country should arguably make PPE for all workers in sectors that need to reopen, such as agriculture. This would get the economy moving, while employing even more people in PPE production.

Yet producing billions of PPE kits may be unviable – even the fast-fashion supply chain can only churn things out so fast. There are also serious issues about environmental waste and disposable equipment, both in India and around the world.

Beyond Asia, the PPE supply chain has also extended to garment factories in countries such as Kenya and Madagascar. This is being supported by the World Bank, again with a view to sustaining employment.

On the positive side, this shift into PPE has protected and created jobs. In India, where global buyers like H&M continue cancelling orders and labour protests roll on, PPE production may mean re-employing at least some of the hundreds of thousands of garment workers who joined the exodus of migrant labour leaving cities early in the pandemic. In Sri Lanka, PPE is potentially providing a livelihood for 300,000 workers.

On the other hand, there’s so much pressure to keep up with orders that it is possible that many factories are running sweatshop conditions and other abusive practices carried over from their usual operations. The PPE supply chain was already known for labour abuses. For instance, recent evidence indicated the use of child labour in surgical instruments production in Pakistan. In Malaysia, there are media reports of Nepali migrant workers in rubber glove factories being subjected to severe abuse.

In China, recent findings suggest the widespread use of Uighur forced labour in numerous sectors, potentially including PPE. During lockdown in India, some states have suspended existing legislation, making it possible for factories to use forced labour. Others have passed legislation extending the working day from eight to 12 hours. At the same time, it is worth pointing out that some countries such as Sri Lanka are known to impose more rigorous standards on their factories.

More generally, garment workers worldwide may not actually have access to the PPE equipment they make. They deserve to be included in the list of key workers in responding to the pandemic. We tend to think of the key workers helping us as only being in our own country, but this is clearly mistaken.

As such, we should be particularly concerned about labour abuses, and do whatever we can to oppose them. Those who are saving our lives should not themselves live their lives under threat. These workers, who were the backbone of the global economy, are now stitching its safety net.

Alessandra Mezzadri has received funding from the ESRC-DfID, the British Academy and UNU-WIDER.

2020-07-03
Previous Post: Combating climate change – why investors should keep their shares in fossil fuel companies
Next Post: Marcus Rashford: a brief history of free school meals in the UK