Coronavirus: the future of women’s football is under threat 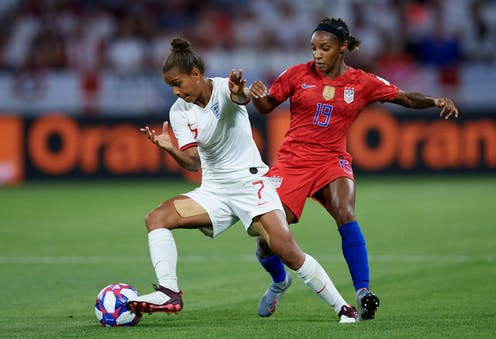 Women’s football has made great strides in recent years. Attendances at the women’s FA Cup final continue to set new records. One survey suggested that one-third of adults are interested in the women’s game and 69% of those believe it deserves the same profile as men’s football.

However, the coronavirus pandemic has left the game in a precarious position. Although the suspension of elite football in England was initially applied evenly to both men’s and women’s competitions, there will be deeper and more far-reaching consequences for the women’s game.

The Football Association’s (FA) 2017 Game Plan for Growth, which included doubling the number of women and girls taking part in football by 2020 and improving commercial prospects, has largely been left unfulfilled. Such promises of equality (football for all) by the FA are starting to sound hollow. The Women’s Super League (WSL) and Championship seasons have now been cancelled. In contrast, plans to resume the men’s Premier League and Championship advance at pace.

Read more:
There are plenty of female superstars in football, but very few women coaches – here’s why


In our recently published research – the first academic study on this topic – we have highlighted why the pandemic is impacting men’s and women’s football differently.

Women’s sport is also underfunded when compared to men’s in terms of things like marketing and prize money – see the tweet below. COVID-19 is also likely to hit many businesses’ profits hard, leaving companies who previously wanted to invest in women’s football unable to. If this causes the pool of sponsors to shrink – a pool that is already small – the future of women’s football will be under financial threat.

At the same time, financial strain on men’s football means women’s football could be one of the casualties. The majority of elite women’s teams are secondary sides under the umbrella of the professional men’s club. There are numerous examples in recent history where relegation or financial hardship for the men’s club has resulted in cutting ties with the women’s team.

For example, when the men’s club withdrew their financial support in 2017, Notts County women’s club collapsed the day before the new season, leaving their players jobless and, in some cases, homeless. When men’s teams cut their ties like this, women’s teams can be left with no choice but to fold.

Finally, elite women’s football is partially funded by the FA. The association has put significant investment into the women’s sport since professionalisation occurred in 2018, but historically, women’s football has been undervalued by the FA. It banned women’s matches from the grounds of FA-affiliated clubs between 1921 and 1971. And during earlier periods of financial insecurity, clubs and the FA cut investment to the women’s game.

Worryingly, the governing body has predicted a loss in excess of £100 million as a consequence of COVID-19. Grassroots and women’s football are not areas likely to be axed, but at present, there is no clear message that women’s football will continue to be invested in.

Steps to save the game?

Women’s football has gone through tough times before. It is resilient. So, COVID-19 may not be a fatal blow. However, swift and decisive action is needed to protect the recent momentum and growth of women’s football in England. Our recommendations are:

1) Clubs must shift their perspective so that women’s football is viewed as a core business and not as a goodwill gesture to the community.

2) Clubs should be entrepreneurial and innovative in their approaches to generating revenue for the women’s game, such as crowdfunding.

3) Women footballers are often on short-term contracts and juggle other jobs and family responsibilities alongside football careers. Issues surrounding wellbeing might be felt more acutely in women’s football. Clubs must work to actively support players.

4) The 12-month delay to the Women’s European Championship, now due to be held in England in 2022, should be seen as an opportunity. Leveraging mainstream interest in the Men’s 2022 FIFA World Cup, a “festival of football” could be created to attract fan interest in the women’s game.

5) When the game restarts, women’s football supporters must remain faithful in their support of the game. Visible advocates will show the governing body and clubs that there is a sustained demand for women’s football.


If we are to continue advancing a “new age” of women’s football, it is important that the women’s game is part of the conversation about football’s return. Without a clearly communicated strategy for the women’s game, the future of clubs and players’ health and wellbeing remain at risk.

Alex Culvin, Beth Clarkson, and Keith Parry do not work for, consult, own shares in or receive funding from any company or organization that would benefit from this article, and have disclosed no relevant affiliations beyond their academic appointment.

2020-07-03
Previous Post: Voice of America struggle for independence highlights issue of state role in government-backed media
Next Post: Why children need to play with their friends as soon as they can