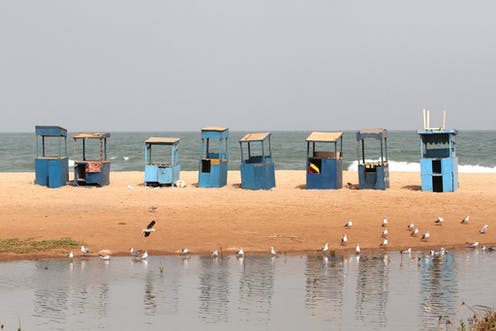 In the Gambia, teams of young tourism guides in their first holiday season are doing something very different from what they learned in training. They have been redeployed to act as coronavirus guides for their local communities, raising awareness and explaining to their fellow Gambians how to prevent the spread of infection.

On the beaches, the normally busy fruit seller huts are empty and everything is quiet. Such is the situation in many African tourist resorts in 2020, with tourism reduced to almost nothing.

Globally, tourism could lose around 120 million jobs as a result of the coronavirus pandemic, according to the World Travel & Tourism Council. The number of holidaymakers travelling abroad is forecast to halve in 2020 as more than US$3 trillion (£2.4 trillion) gets wiped off global tourism GDP.

This will be keenly felt by the many countries whose people depend on tourism. Two examples on opposite coasts of Africa are the Gambia and Kenya. Tourism accounts for 9% of Kenya’s GDP and 20% in the Gambia. It provides a living to around 10% of Kenyans and nearly a fifth of Gambians, while acting as an important source of foreign exchange.

In both countries, the pandemic is damaging hotels and tour operators, putting people out of work, reducing GDP, and affecting thousands of small businesses in the tourism supply chain, such as providers of food, transport and souvenirs.

There are also wider consequences that may be less obvious. Poverty alleviation initiatives tied to tourism through youth and women’s empowerment programmes are being set back.

Tourism can also support conservation. In Kenya, the Ol’Pejeta Conservancy to the north of Nairobi is home to the world’s last two northern white rhinos. In 2018, Ol’Pejeta spent US$2.6 million on wildlife conservation and community development, much of it protecting endangered species from poaching.

How they are responding

Kenya’s 51 million population is more than 20 times bigger than that of the Gambia. Tourism is usually the number-one source of income after agriculture for those in rural areas, especially on the coast and in places rich with wildlife. But for a country that specialises in high-end safari and beach holidays for rich westerners, the crisis has hit hard.

Early in the crisis, tourism associations advised their members on keeping clients and staff safe, as well as holiday cancellation policies. They negotiated with the government, tax authority and banks on how to protect businesses. Tourist businesses have now cut back to skeleton staff and business partners have been giving one another 12 months’ grace on debts.

The government is providing some financial support to industry workers through an economic stimulus programme. It has also mobilised tourism-association leaders into a taskforce to oversee reopenings.

In the Gambia, tourism had already suffered in recent years from political unrest, Ebola and the collapse of Thomas Cook. It is also over-dependent on a few tour operators selling winter-sun holidays, and charter flights that find it more profitable to fly to the Mediterranean during the European summer. This imposes a “season” that limits the potential to bring in tourists all year round.

As well as deploying the youth tourism guides to help fight coronavirus, the Gambia Tourism Board has worked with the ministry of health to develop safety measures for hotels. The government is working with the UN to kickstart recovery efforts to safeguard livelihoods. Meanwhile, those in the industry have called on the government to provide tax breaks, moratoriums on loans and support packages for wages and economic stimulus.

In both countries, the emphasis during the crisis has been on collaboration. But this needs to happen internationally, too, since neither has the “fiscal space” for the economic stimulus seen in advanced economies. A Mandinka proverb says that “rice fields with the same borders share the same waters”. We’re all in this together, in other words.

In March 2020, the World Economic Forum called on the US Federal Reserve and other central banks propping up their economies with quantitative easing (QE) – creating new money to buy their government’s debt – to help developing countries by also buying their debt. There is no sign of this happening.

Some bigger developing countries such as South Africa have launched their own QE programmes, but for many others dependent on tourism, the lack of international support is making the crisis worse.

The crisis is also an opportunity to develop more sustainable tourism. The Gambia has already shown a way forward by developing an alternative to “sun, sand and sea” packages known as
The Ninki Nanka Trail. The trail enables visitors to discover the Gambia’s rich natural and culture heritage while experiencing the important oral legend of the mythical Ninki Nanka dragon said to reside in the creeks of the River Gambia.

Launched in February 2020 and set up with the help of an EU-funded Youth Empowerment Project, the trail aims to do two things: help the Gambia to reduce poverty in rural areas by diversifying into community-based tourism, while extending the season into the “green/tropical” months of July/August.

The Ninki Nanka Trail shows how tourism can be used to celebrate culture and facilitate meaningful engagement with communities, but there is much more that could be done in Kenya and the Gambia to target tourists that bring environmental and social benefits as well as economic ones. With stronger international support and a good vision for the future, it is a good moment to build something better than what was there before.

The authors would like to acknowledge and thank Job Odhiambo from the Sustainable Travel and Tourism Agenda in Kenya who provided much of the content and background research for the section on Kenya.

Adama Bah does not work for, consult, own shares in or receive funding from any company or organisation that would benefit from this article, and has disclosed no relevant affiliations beyond their academic appointment.

2020-07-03
Previous Post: Women leaders and coronavirus: look beyond stereotypes to find the secret to their success
Next Post: Curious Kids: Why is our dog so cute?